Our first stop on this year’s Convoy for Charity was Corowa. While I consider myself to be quiet the city girl, I’m always surprised how comfortable I feel when I get into these country towns and especially their surrounds.

Our hosts for this leg of our journey were Kim and Steve at the Rivergum Tourist Park. The park is situated on the banks of the beautiful Murray River and I enjoyed getting my “nature on” wondering through the wetlands between the park and Murray that are filled with all sorts of wildlife.

I’m bunking in with one of our show host, Robby Nethercote and I think we have the pick of cabins at the park – the beautiful poolside two-bedroom deluxe – what a ripper.

This is my first Convoy for Charity and I wasn’t exactly sure what to expect. We all arrived full of excitement, the cast, the crew and eight caravanners – some in couples, some on their own and even some with kids in tow – towing our Best of the Best caravans for the 2020 Summer Series.

There are the usual suspects, the Prousts in The Elite van, the Sinclairs in the New Age, the Mays in the Nova, the Dysons in the JB Caravan and the Ridgley’s in the Crusader. And joining us for the first time is Steve Zammitt from MDC with his own MDC van in tow and the Quinn family in their Lotus. (You’ll learn more about the vans as we travel.)

The Quinn’s are our “Island Lappers”. They set out from their home base of Perth in May this year with their three children who are now 8, 5 and 10 months old and made their way north. Eventually our magazine editor Alison Huth heard about them and asked them to join us on our Summer Series – and the rest is history. You can follow the Quinns at www.lappingtheisland.com.au

Arriving in Corowa we were all excited to see one another. Our caters from Sweet Seduction put on a delicious meal for cast, crew and convoyers and we got down to business – the first production meeting. Our stand-in Director Tom welcomed everyone and went through some of the important business points before we all dispersed into our groups for further meetings.

The next couple of days the cast and crew, along with some lucky convoyers explored the greater Corowa Region visiting and filming attractions for the first episode of the Summer Series – going to air in January 2020.

My main task on this trip is to pull together six Happy Hours along the way – one in each of the parks we will be staying in over the next couple of weeks. During these events we “Open for Inspection” the beautiful vans we are towing while there’s plenty of fun and entertainment on offer.

I was a little anxious as to how the weather was going to behave on the night of our first Happy Hour. It had turned quite chilly and rained on and off all day. But, as we were putting together the entertainment area the wind died down, the clouds parted and low and behold we had a perfect night.

During our Convoy for Charity we are raising money for Rural Aid, a charity that supports our rural folk in times of hardship – in particular times like now when most of our country is being ravaged by drought and fires.

You’ve got to love the caravanning community and the Corowa locals. Once they heard what our Happy Hour was all about, I don’t think a monsoon could keep them away. And as a result, we had a wonderful evening while raising plenty of money for Rural Aid.

We were also so happy to be joined by Pam from Sweet Desires Cakes and Cupcakes who donated here entire takings for the evening to Rural Aid.

Now that Corowa is behind us, I’ve experienced their warm hospitality and generosity and as we head to our next destination, I’d like to think of myself as a little more country now. Some of the city grim has washed off and I’m a little more inclined to not get the hair straightener out, apply sunscreen instead of foundation and actually say g’day to people I’m passing in the glorious wide streets of the towns we go through. And this is only stop one!!! What’s it going to be like after 18 days – I’ll be driving a tractor back to Melbourne.

Thanks Corowa Region, all the spectacular staff at the Corowa Visitor Information Centre, the team at Rivergum Holiday Park, the amazing Nick at Old School Cruises Rutherglen who gave us a couple of cruises to raffle off at our happy hour, great folk at All Saints Winery and last but not least the most informative and generous (thanks for the tea and cake) people at the Corowa Federation Museum. 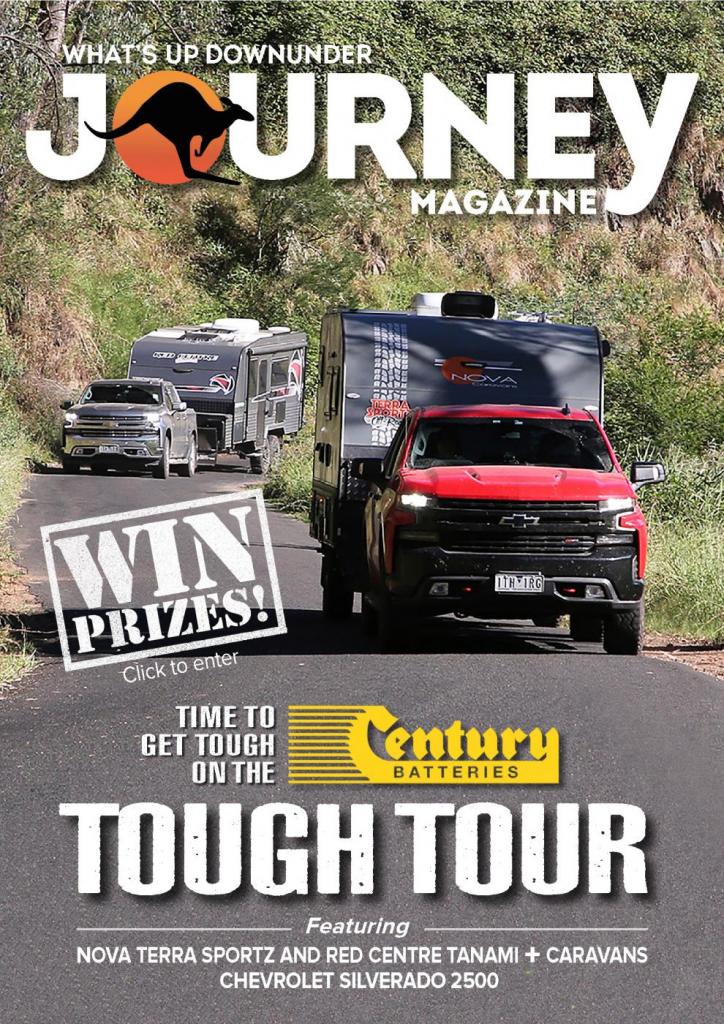 #bigdog for a #bigdog! Bacon the Great Dane was ou

@everythingcaravancamping convoy is on the move!!

Loving the sunsets on our @everythingcaravancampin

#gmspecialtyvehicles Silverado’s are hooked up a

On the @everythingcaravancamping Trip of a Lifetim